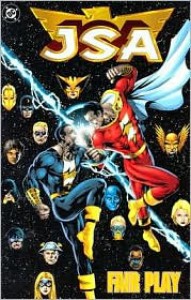 My first official JSA graphic novel. I admit I avoided these for a while because I thought they were all set in the early 20th century, and I am turned off by that dated 50s morality feel. However, I was pleasantly surprised to see that this takes place in the modern period, where time has passed, and only the long-lived (or immortal) JSA members are still active and alive in the organization.

I was not blown away by this, but since I liked it more than I expected, I gave it three stars. They have some interesting team members with cool powers. It's surprisingly multicultural, which is a bonus. They take on some intense missions, and are actually kidnapped into Roulette's modern day gladiatorial games, which are highly lethal, to say the least. I liked the character's ingenuity and use of their strengths and team work to get out of those situation. Loved the Batman cameo (big surprise).

I liked some characters more than others. I didn't care for the young fellow whose name I forgot. He was a petulant brat.

Not a title I'd reach for first, but I'm willing to read more