The Man of Her Dreams 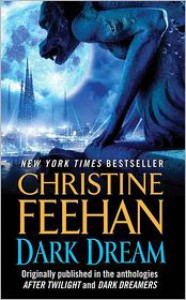 This is a meaty little short story. It definitely has an insta-love vibe, I think most out of all the Carpathian novels. But the story has a lot to offer despite that. Falcon is one of the original Carpathian warriors sent out by the previous Prince Vladimir, which means he's at least a thousand years old. It's amazing that he's held onto his honor and Carpathian sense of ethics and not turned vampire. I like to think that the fact that Sara was out there in the future was one of the reasons he didn't give in, but he's very, very close to turning when he senses his Lifemate. Sara has been stalked by a vampire who killed her whole family for fifteen years. She's stayed one step ahead of him, traveling the globe and helping orphaned children. She meets Falcon and he realizes that she's his lifemate. She realizes that he's the male she's been in love with since she found his journal on one of her archaeologist parent's digs. The romance part is the easy part. The difficult part is keeping Sara safe from the vampire.

This book is full of action and some horror elements with the despicable vampire and his zombie-like human servants. While I like the romance aspects, I find the whole Carpathian culture thing very interesting. It was great to touch base with with Mikhail and Raven and Jacques and Shea. Jacques is a lot more stable than he once was. He's definitely benefited from having a lifemate in Shea. I read this after reading Dark Descent, out of the Dark Nights book. Feehan is developing the whole storyline about the Carpathians trying to find a reason for their infertility and infant mortality, and slowly but surely recruiting assets in their cause. Gary shows up briefly, and it's making me excited to read Dark Promises.

I have no issues with this book. It was a solid read.