Who is the real monster? 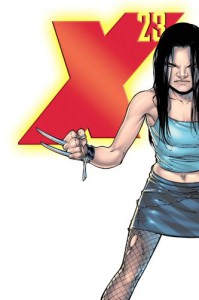 The real monsters are the ones who try to create them.

A brilliant geneticist embarked on a quest to create the perfect weapon. Nobody believed in her, but when she finds a person willing to finance her research, Dr. Sarah Kinney comes to realize she has gotten into bed with real monsters.

With stolen genetic material from the legendary Weapon X, aka Wolverine, these fringe scientist create clones (to make more weapons, of course), only to realize that the clone embryos aren't viable because of the Y chromosome. Dr. Kinney hits on the idea to use a X-gene. Of course the male chauvinist pigs don't like the idea. She does it anyway, and X-23 survives. Her penance is to have to carry the embryo to term. This backfires on the researchers and the company, because Sarah bonds with her daughter, instilling lessons into her that will come into play in her life at a later time. Despite the fact that Dr. Zander Rice, a %$%* of the first order, exercises his complete misogyny on X-23 (and latent hatred of Wolverine, who killed his father), torturing her to making his weapon, and unleashing her into the world as a killing machine with the use of his trigger scent.

This story is very tragic and also heartbreaking. I'm not sure if the writer intended to put so much pathos into the story, or if he was just trying to create a credible origin story suitable to Wolverine's daughter. The end result was a graphic novel that inspired a lot of emotion in me. Outside of my awe that X-23 is so awesomely kickbutt, is my sadness for her deprived childhood and what she was forced to do by her handler. I mean I can't help but appreciate an assassin of her caliber. But the idea of a child being raised that way and created to be a weapon, is heinous. It reminded me of Saber of the GhostWalker series by Christine Feehan (Predatory Game, which is a nice recognition, since I love that series. She was also cultivated as a child assassin (using her innocent, childlike appearance to infiltrate and destroy her targets).

To think I didn't even know who X-23 was six months ago. Boy was I missing out. Glad I discovered her. She's up there as a Marvel favorite now for me. Unfortunately, the Craig Kyle versions are out of print. But at least the awesome Marjorie M. Liu takes over, and those are still in print, so I will be checking those out.

Because of the storytelling and lovely artwork, I'd have to give this one 4.5 stars.