Too lukewarm to be frozen 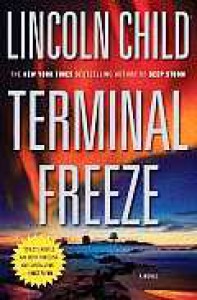 This was a little 'blah' for me. But I think I don't care for monster stories. I don't like twiddling my fingers and waiting for characters to be picked off by the monster. I also didn't like how predictable it was for who would die. It was like Child was mainly killing off the jerky characters. While I am not saying that I want to see likable characters killed off, it seems too calculated to establish a character as a putz and then kill them off. It was a bit sadistic of the author, quite frankly. Also, there were characters I didn't know if they made it at the end of the book. Honestly though, I wasn't too sad about one of the characters who got eaten. That's terrible of me, I realize it.

I did like the descriptions of the frozen North a lot, but that's because I love cold weather and winter settings. I live in Texas, so I don't get nearly enough 'winter.' When I feel hot and I really miss winter, I even day dream about there being a good two feet of snow on the ground and playing in the snow. That crunching sound it makes when it's a newly fallen powder. Yup, that's how much I love winter and snow.

Probably my favorite part of this book was the look at winter as a brutal adversary in itself. Now that I could get behind. My favorite part was when the refugees from Camp Fear had to drive across two ice lakes. That was fascinating and it was probably the most exciting moments of the story.

I didn't quite like the concept of the predator itself. It never came together as concretely as it should have. Also, some characters who had promise were underutilized. Logan promised to be an intriguing character, but he was barely in the book. Also, Marshall didn't have much charisma as a lead. Considering his tragic past, I think he didn't have his fears challenged enough in the long run. Usuguk felt a bit one-dimensional to me. The native shaman who provides spiritual/cultural background for the story.

I think this book is a low three stars for me. I rarely give under 3 stars, so getting a three isn't a compliment per se. It's more like saying it's a blah book that didn't offend me enough or I didn't dislike enough to rate lower. It wasn't a bad book, by any means. Just mediocre.

I am thankful for the suggestion to read this for our Action/Adventure Aficionados group read. It was pretty listenable as an audiobook. I am grateful that I found it at my library in audiobook, but I don't think I could have committed to finishing this in print. It just didn't get me excited enough.
thriller Horror Arctic Blah Monster Story winter or cold setting