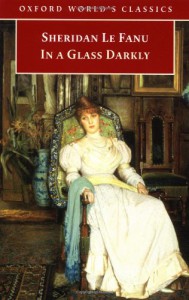 This was the Goodreads Classic Horror Lovers Tales to Chill Your Blood group read in October 2017. I listened to it on Kindle. This volume contains five stories: "Green Tea" "The Familiar" "Mr. Justice Harbottle" "The Room in the Dragon Volant" "Carmilla" I will go through and discuss each story separately.

"Green Tea"--I have read this story before. It's interesting, although the way it's written is a bit on the dry side. It's told with detachment, which I suppose makes sense as it's told through letters written by Dr. Martin Hesselius, a paranormal investigator. The interesting component was the concept of green tea as a substance that can cause a person's third eye to open and to allow them to see into the spirit world. The unfortunate clergyman who is the focus of the story is able to see a monkey that continues to haunt him until it drives him crazy. It could have been more suspenseful, honestly. 3 stars "The Familiar"--A psychological horror story about a man who is being haunted by a figure from his past as a sea captain. Another use of the trope of a person being driven mad by his perception of something no one else can see. I was not particularly impressed by this story. 2.5 stars "Mr. Justice Harbottle"--a story about a judge who is haunted by the spirits of those he wrongly condemned to death. Nice build of suspense. I think the writing is much better in this story than "Green Tea" and "The Familiar". Ironically, I read the original version of this story, "An Account of Some Strange Disturbances in Aungier Street" (1853) out of another ghost story volume I was reading in October. I like that it deals with the concept of spiritual consequences for the wrong that one does, even when the person seems to be powerful in this life. The judge was not just a corrupt official, but he was also a degenerate who treated those around him poorly. 4 stars "The Room in the Dragon Volant"--This is more of a suspense story. It reminds me of something Robert Louis Stevenson might have wrote. It's one of the longer stories in the volume, with some involved storytelling. It's not a ghost or horror story, although there initially appears to be supernatural elements. Lots of nice twists in the story that did impress me. 4 stars "Carmilla"--Another reread for me. A very famous novella about a female vampire with some very obvious homoerotic overtones. Carmilla chooses exclusively female victims and uses her allure to develop their attraction to her. Carmilla is a create of simultaneous seductiveness and repulsion to her newest victim, Laura. Readers can plot this story out and see over time that there is something very wrong about Carmilla. The story builds to an exciting climax as Laura's father and other concerned parties work to deal with the evil vampire. This is old school vampire horror. Carmilla is the bad guy. Readers who enjoy the romantic angle cannot escape the fact that Carmilla is a sexual predator who is endangering the life of Laura. This was written during the Victorian age, in which sexual values were highly pruritanical, so it couldn't have been written any other way without national outrage. However, it was a night springboard for plenty of later vampire stories that focused more of the erotic aspects and less on the evil monster component. First time I read this, I found the flowery descriptions tedious. I enjoyed this a lot more this time around, maybe because I listened to the narration. 4 stars. Overall, I would give this 3.5 stars, which is an average of my individual ratings. Le Fanu is a good writer, but his style isn't my personal favorite. He's not the most active writer and I don't find his writing particularly scary (other than a couple of moments in Carmilla). However, he has some interesting ideas and concepts and his storytelling has been influential to the genre of classic horror.